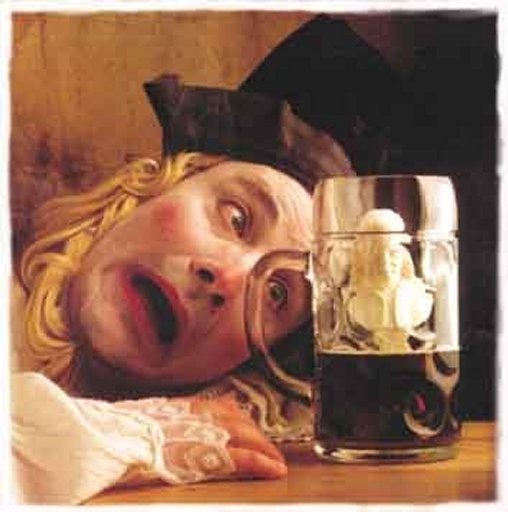 a beery musical satire for 3 singers, 2 actors and 6 musicians

When we hear Bach, we think of churches. And it's certainly true that he spent most of his life in their service, among others in Arnstadt, his first steady job where he got to know the local inns. When he wasn't sitting at his organ, he enjoyed and partook of the same things as most other citizens.

The music of his "Wedding Quodlibet", which shows that Bach knew how to have a good time, has survived. The surviving Libretto "The Shrewdness of the Authorities in Ordering the Brewing of Beer" in its four acts: Drawing lots, Malting, Brewing and Serving, has been reworked by Miro Dobrowolny in the course of his examination of J.S. Bach.

In this Beer Opera, pleasure is to be perfect: not only for the ears and the spirit, but also for the throat. The action takes place in an inn atmosphere - totally opera: individual and parallel actions at the audience's tables: inclusion of the audience in the scenes and also musical participation in the action. In the midst of this action is Johann Sebastian Bach, a composer whose love for life and resulting difficulties with church authorities as well as the amusing anecdotes which accompany this we seldom get to see.

Then as today, the Beer Opera is a musical satire on people whose life revolves around trivial details such as calculating how much hops and malt you need for a good beer. And they calculate and calculate, and if they were still alive today...!